Albuquerque Drivers May Be Relying on Unsafe Hands-Free Devices 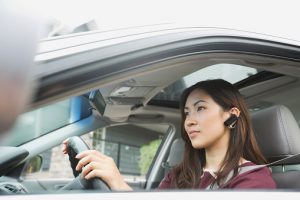 Drivers are bad at assessing their own level of distraction. Surveys indicate that drivers are aware of distracted driving, and agree it is a problem, but still cannot abstain from behaviors that divert their attention from the roadway.

The AAA Foundation for Traffic Safety made similar findings: in its survey, 88 percent of drivers believed that distracted driving is on the rise. At the same time, nearly half of respondents admitted to recently talking on a cell phone while driving, and 35 percent had recently sent a text or email while driving.

These facts suggest that, in spite of appreciating the risks of distracted driving, drivers are unable to use this knowledge to effectively reduce such behavior.

The Problem With Hands-Free Devices

In order to reduce distractions in the vehicle, many drivers rely on the use of hands-free devices (such as speaker phones, Bluetooth connectivity, headsets, or voice commands) while driving. This is based on a mistaken belief that hands-free communication is safer than using handheld devices. Unfortunately, the research does not support this belief.

Using hands-free devices can give drivers a false sense of security. A driver may feel that there is no risk to communicating in this way while driving, because he or she is not physically holding and manipulating a phone. But this ignores the heavy cognitive demands required to hold a conversation.

Whether it is a spoken telephone conversation or dictating a text message or email, the conversation diverts the driver’s attention from the road.

The Legal Duty of Care Owed By New Mexico Drivers

All drivers on the roads of New Mexico owe a general duty of care to other road users. This is the duty to act as the reasonably prudent driver. Evidence of a traffic violation can be introduced to prove that a driver was negligent. An Albuquerque car accident attorney can help injury victims hold distracted drivers accountable for their unsafe driving behaviors.

Even if a driver is using a hands-free device, he or she can still be found negligent. Allowing oneself to become distracted in any manner is a public health risk which endangers all other road users. It is important to hold distracted drivers accountable for their dangerous conduct in order to deter such conduct in the future.